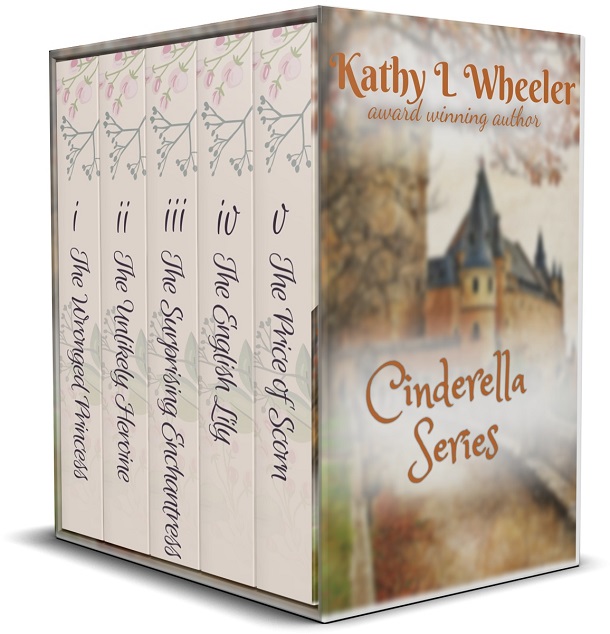 Available at Amazon on Kindlle Unlimited

Finding his mysterious princess by trying her glass slipper on every maiden in Chalmers Kingdom sounded like a brilliant scheme until the silly thing slid quite easily on the foot of the wrong girl. Now how is Prince Charming supposed to find his true love? Unbeknownst to either, his mother, the queen and her feisty twin (Cinderella’s infamous fairy godmother) have a lesson to impart—impulsive decisions, do not a future king make!

A fun review for The Wronged Princess

Lady Pricilla is a modern woman. Marriage and children? Hah! She has brains and intends to use them. But Sir Arnald is different. Isn’t he? And how will they survive when they discover villains embroiled with smuggled goods and danger?

Delusions of grandeur? Happily-ever-after? Lady Esmeralda is destined for life with a fluttering eye syndrome—a deterrent to any prospective intended. Alessandro de Lecce’s efforts to save Chalmers Kingdom and future heir are nil without Lady Esmeralda’s assistance. There is more to this fluttering-eye miss than meets the . . . eye!

Heiress, Lady Kendra Frazier, is devastated. The love of her life just married another and now her only desire is distance herself away as quickly and as quietly as possible. Joseph Pinetti Gray, Viscount Lawrie, is facing financial ruin. Luckily for him, Kendra’s impetuous nature has handed him the fortuity he requires to save his family’s downfall. But his carefully cultivated plans come to a grinding halt when he finds himself falling in love for what should have only amounted to a marriage of convenience. And how can the curse of an old doll help?

Did you ever wonder why Cinderella’s Evil Stepmother was so vile? So mean? Fourteen years after Prince Charming and Cinderella are crowned as Chalmers King and Queen, Cinderella, Pricilla and Esmeralda gather at their mother’s deathbed. Lady Hildegard Roche has nothing but resentment and scorn for the stepchild who culminates all that was stolen from her. Stunned silent, the sisters learn how tragedy shaped their mother into the woman she became. The question is: Can the sisters forgive her?