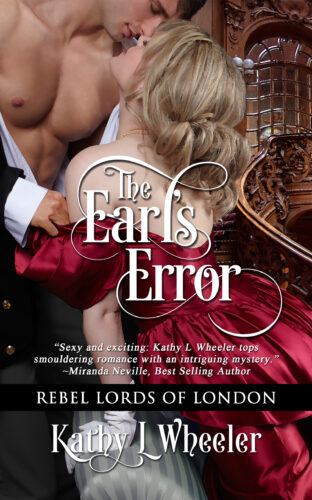 The first in the Rebel Lords of London series, barring the prequel, Enchanting the Earl,

The Earl’s Error is now re-edited and republished.

All part of the Rebel Lords of London series.

Lorelei Grey, the countess of Kimpton, carries her love for her husband hidden, deep within her heart. So when she learns he’s exiled her brother from England she is beyond devastated. Worse yet, what is she to do with the knowledge that he’s fathered his ex-mistress’s unborn child? Her only stipulation when they’d married was that he treat her with respect.

Thorne Grey, the Earl of Kimpton, is in the unique position of desiring his adorable wife far more than usual in those of his station. But someone is spreading horrific untruths, and through his own lack of foresight, Thorne finds he can hardly defend himself. Her threat to leave throws him in a panic. What does he do? Offers her an exorbitant amount of money to stay. Now he has two weeks, and prays he’s bought enough time to locate her missing brother, and prove he’s not the scoundrel she believes him to be.

Their explosive passion can’t be denied. And, neither can the desperate situation in which they become embroiled—one that threatens their very lives.

“What the devil?” Thorne relinquished the art piece to Brock’s possession and glanced out the door to see the footman holding a sleeping countess. “Andrews?” The discomfort on the footman’s face kept Thorne from punching first and asking questions later.

“I beg your forgiveness, my lord, but Lady Kimpton missed her step as she alighted from the carriage—”

Thorne rushed forward. “—is she hurt?”

“Give her over, Andrews. I shall handle matters from here.” He hoisted Lorelei from Andrews. The faintest whiff of brandy mingled with roses tickled his nostrils. He frowned. “I thought she attended Lady Dankworth’s tea.”

Lorelei curled against his chest, her trust in him squeezing the air from his lungs. “Thorne?”

Shaking his head, Thorne carried his inebriated wife up the stairs. “I’ve half a mind to forbid you from future teas, madam,” he said softly as he made his way down the hall to her chambers.

She rubbed her head against his chest much like an affectionate kitten. A kitten whose claws were retracted, because even the tiniest claws drew blood.

Her vulnerability reached deep within his heart. His soul. He would do anything within his power to shelter her from hurt—aching head notwithstanding. Even if it meant dragging that brother of hers from the dregs of hell, he’d manage that as well, he vowed.

“I do hope you enjoyed your tea, darling.” He chuckled softly. Her arms crept up around his neck, and his breath stopped. “You do realize you are potted, my love?”

She looked up at him, her gaze unfocused. The effect rendered him frozen. She blinked, breaking her mesmeric hold over him. He unhooked her arms from his neck, and he went down to his knees, setting her hands on his shoulders. “Steady now,” he said, slipping off one shoe, then the other.

Creamy thighs hit him at eye level, and he swallowed past a hard lump, rethinking his current position. He’d best leave the silk stockings. He rose quickly. “A small respite for you, my lady.”

Her arms snaked back around his neck and tightened, her nose in the crook of his shoulder. He stood fully, pulling her up with him, though resisting her body completely was not something he could manage at the moment. He held her steady. She was soused, after all.

“D-don’t leave me, Thorne … I-I was so frightened … I-I thought you … were d-dead.” The words were a heated mumble against his neck and threatened to drop him back to his knees, where restraining himself would prove impossible. With a groan, he pulled her weightless body tightly into his. Wisps of flaxen hair had worked free, brushing his cheeks, their whispered touch teasing him without a shred of mercy.