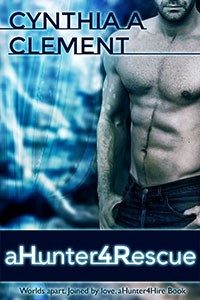 A unit of elite alien warriors, known as Hunters, crash lands on earth and their leader is torn between getting his men to safety or protecting the human woman he has bonded with.

Ardal is the leader of a unit of elite alien warriors known as Hunters. All Hunters have been deemed dangerous and ordered executed. His decision to escape sends their ship plummeting to Earth. When Fiona risks her life to help his men, Ardal swears to protect her. The last thing he expects is to be attracted to Fiona, especially when it is forbidden for a Hunter to mate.

Fiona is in hiding from an abusive stalker. Her life changes forever when she witnesses the crash landing of a group of alien prisoners. She helps the injured and goes on the run with the aliens as they elude the government agencies that are pursuing them. She grows to trust Ardal, their leader as time and again he proves that he will do anything to keep her safe.

EXCERPT: Her touch had a power that he had never felt before. It was stronger than any natural force or weapon. Fiona’s tongue flicked over her lower lip and for the first time in his life he wondered how a woman would taste. Not just any woman, though. Fiona was the only one he wanted.

He pulled her close and with his free hand brushed her hair from her face. By Cygnus, she was beautiful. He glanced down at her lips and was lost. Lowering his head, he captured her mouth. Thoughts scattered as sensation took over. His tongue glided over her lips. He licked and nibbled until she sighed and opened for him.

He thrust into the warm, moist haven she offered. His body hardened and control was forgotten as he delved deeper, skimming his tongue against hers, soothing and sliding until bliss spread over him. A surge of longing and need shot through him and concentrated in his groin.

Her scent filled his nostrils and the pounding of her heart was music to his ears. His hands roamed her back, but her shirt blocked a total bonding. With shaking fingers he pulled the cotton fabric from her jeans and then buried his hand beneath it. He connected with the silky smoothness of her skin and his body sizzled with intense yearning.

Never had he felt such pleasure. It was overwhelming. Fiona seemed to be experiencing the same because her body moved against him with frantic impatience. Desire, hunger, concern, and reverence all battled inside of him. Fiona was his pair bond. She deserved better than a hurried mating. He had to end this now.

A groan of conscious escaped him and he pulled away. He had to do what was best for Fiona. She needed time; time to trust him and time t 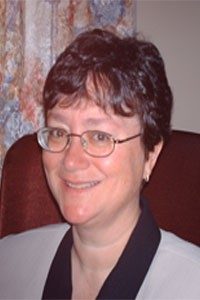 o commit to him. She looked up at him, her eyes glazed with passion. His breathing was too rapid to speak. He rested his forehead against hers and tried to recover. His body shook, his groin ached, and his brain refused to focus, but he had his answer.

Cynthia Clement is an Amazon bestselling and award winning author who began writing stories in her teens. She believes in second chances, exploring new ideas, and bringing the impossible to life. Her novels, whether contemporary, historical, or science fiction, all focus on love, honor, and intrigue.

Cynthia spent most of her childhood with her nose in a book. She began writing stories in her teens, but it wasn’t until her forties that she took her writing seriously. She enjoys reading and collecting books, quilting, gardening, ghost hunting, and great conversation. She has a BSc in Biology and a BA in anthropology and recently graduated from nursing. She lives in Canada with her husband of thirty-one years, her teenaged son, and two dachshunds.