Good morning! Kathy was nice enough to share her blog with me, so I wanted to talk to you a little bit about stepping out of your comfort zone. 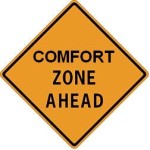 If my kids knew I was writing about this they’d be cracking up. You see, stepping outside of my comfort zone is not one of my strong suits. When we eat out, for example, it’s easy to predict my order. At Biaggi’s I always get fried ravioli (it’s excellent there, if you have one). If it’s a deli, ham and cheese. Wendy’s- baked potato or burger, and I’ll always try to finagle my husband into letting me have a Frosty. Any place that has a chicken quesadilla, that will be my order. Panera’s, cheese Danish. You get the picture. So I’m hardly one to talk about trying something new. 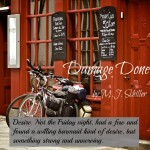 But there was a time I did stretch myself a little, and it worked out to my advantage, so I wanted to share that with you. To “make a presence” on the Internet as an author, I needed to grow my blog and became a tour host for Buy the Book Tours. As part of that job, you can choose to review books. Free books? Sounded great to me! But the first several books offered were not the type I usually read. I tend to pick up sweeter contemporary romance. After a bit I felt like I needed to review something, so I chose a historical romance by Tracy Brogan called Highland Surrender. This was set in Scotland, which was way out there for me, but I loved it. Next up? Beneath the Sun by Amy Burgess, a paranormal romance about shape shifters! Talk about out there! But what I soon discovered was that it didn’t matter what the genre was, as long as you had a skilled writer, it would interest me.

The reason I’m thinking about this lately is because I myself have three different collections of books I’ve written. My most successful is my Rocking Romance Collection, about rock stars, and then I have a Romantic Realms Collection, which feature royalty, and a Real Romance Collection which showcase heroes and heroines with “real” jobs, (construction workers, waitresses, teachers, cops…). Almost all of my books lean toward romantic suspense because I love the whole thrill of danger and adventure thing.

In recent days I’ve been a little stymied as to why my rock star readers haven’t jumped all over my other collections. If you like the way I write, I think you’ll find that it doesn’t matter whether my hero is a rock star or a roadie. They’re all going to be equally hunky, dynamic, witty, and with the right touch of sensitivity, too. (If I do say so myself!) Family life is going to be equally charming and wacky whether it’s part of a band, or in a desert palace. So I’m challenging you. Take a chance on something just a bit outside of your usual. If you haven’t read one of my books, try me out. You might just be surprised! If you’ve read my rock stars, come meet my princes, or a sexy hard-hat-wearing hero or two. And let me know what you think. You all do that and I just might try that flat bread at Pot Bellied instead of my usual hammie. Have a great week! And thank you, Kathy, for having me on!

Now here’s a look at my latest release, Damage Done.

When an unhappy youth leaves him damaged, will Teddy Mckee be able to find love? 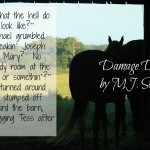 “Teddy Passmore McKee was born in Cork, Ireland, with a limp and a chip on his shoulder that threw his balance off all the more.” When he falls in love with the dark haired beauty born of an Irish father and a Spanish mother, will Gabrielle Quinn be able to restore his balance? And what about the charming Sean Hennessey? When Gabby catches his eye, too, will Teddy’s playboy best friend cause his own damage?

Fourteen years later, will Teddy and Gabrielle’s son be able to overcome the damage done to him in his childhood?

“Even through bloodshot eyes he could see she was different.” But can Michael leave behind the bottle, and his womanizing ways, to win over the lovely Tess Flanagan? Tess has sustained some damage of her own. Can she and Michael overcome the terrors of the past and learn how to love each other?

And if they do, will they be able to elude those after them who want to create their own damage?

On the run after an altercation leaves their boss in a pool of blood, will Michael and Tess be able to stay one step ahead of their pursuers? Or is it simply too late to correct the damage that has been done?

“Tessie…” He offered again. “We have to get out of here.”

She remained frozen in her spot, staring blindly over the cliff. He moved a step closer and gently grasped her elbow. “Tess—”

She whirled around and his heart caught in his chest as he stared into her wild green eyes. Tears shone on her damp cheeks, glimmering in the moonlight like trails of scattered diamonds. “Nay, Michael,” she said, her words coming out choked. “I have to tell them the truth. It’s my fault. …I k-killed him.” She sobbed.

He looked at her sadly, begging her, “Let me help you.”

The back door creaked open and light spilled out from the bar across the grass, startling them. He saw Jimmy Flynn’s outline in the doorway. “They’re out here!” he yelled.

Without waiting for a response, Michael took Tess’s arm and steered her along the cliff’s edge. He stepped over the railing and helped her to the other side as well. They stood on a narrow ledge. To the left a trail dropped off toward the sea. He led her skittering down the path, loose rock pebbling the beach far below. He had taken the pathway many a night when he was drunk and feeling particularly reckless. Tonight he hurried over it with only self-preservation and Tess’s safety in mind.

They heard voices above them, coming from every direction as searchers fanned out along the top of the cliff. Their eyes met. They hardly dared to breathe. A flashlight beam ventured over the railing and along the cliff face. She clutched his hand, squeezing it until he lost feeling in his fingers. He tried to flatten himself even more tightly against the rock face, wishing it would somehow melt and absorb them. Several seconds passed and the beam of light was joined by another, and another, each swinging away, and then toward them again.

He grabbed a quick look at the churning sea below then closed his eyes for a second, and his stomach dropped. He took a deep breath before turning his head to look at Tess. Her eyes were closed and her lips were moving fervently, but she emitted no sound. He swallowed, wondering again why the sight of her affected him so. After several minutes a voice called out, “You won’t get away with this, Mikey.” Had someone seen them? He heard Jimmy Flynn mutter, “Wherever they are, we won’t find them tonight.” One by one the lights disappeared until only a solitary beam shone. 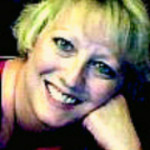 MJ is a lunch lady in the heart of Central Illinois. My gosh! Can you get more folksy than that? She met her husband at the University of Missouri-Columbia and now she has a nineteen-year-old (how did that happen?) and seventeen year old triplets! She loves to read, karaoke (where she can pretend she is a rock star) and spends WAY too much time on Facebook. She grew up in St. Louis and still has family there.

You can find DAMAGE DONE at:

It’s even easier to try MJ out as her romantic suspense The Heart Teaches Best is free for the month of August to celebrate the release of Damage Done.

Download your free copy today of The Heart Teaches Best at:

Thanks for coming by, MJ! Happy Reading ~~ Kathy L Wheeler