Another Deleted Scene ~~ from Lies That Bind ~~ Kathy L Wheeler 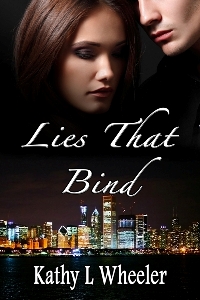 Two hours later Kelly had to admit, after being comfortably ensconced in a vibrating leather chair, feet soaking in soothing scented water that this was exactly what the doctor ordered.

The technician, a thin Asian woman tapped her leg. Kelly raised her foot as requested. She wondered how old she was. Asian woman never seemed to age.

She leaned back and closed her eyes, let the vibrating chair do its magic, obeying the woman’s non-verbal commands. Another tech rattled around and she had to peek through one raised lid. He pushed a tray laden down with a small dish of soapy water and various tools obviously there for her manicure. She happily handed her hand over to him.

“It’s been a long time,” Gwen grinned back.

“You look terrific.” And she did, Kelly thought. Her bright red hair with its natural curl suited her round face perfectly, nose sprinkled with freckles. Her dark brown eyes, as warm and friendly as she remembered.

“Looks like we both had the same idea today. Self-pampering.”

Kelly gave a start of surprise.

Gwen shrugged slightly plump shoulders and said, “It’s all over the papers. Your hasty marriage to Alex Gentry. The party at The Ritz. All fuss and glamour.”

Kelly blew out a breath, “Yes. Yes, we…did.” Then grinned too. She couldn’t help it.

“I always knew you’d do okay for yourself. Much better than that Zoe Worthington.”

“Zoe Worthington! You mean the woman I replaced at Wildcat? That was eons ago.”

“So, what are you doing for lunch today?”

Alex picked up the phone on the first ring.

“We have got to do something about this child’s language,” his mother barked in his ear.

He winced terrified to ask what word it was she threw out this time.

Elena lowered her voice. “She said the f-word.”

“Oh, for God’s sake, mother.” Relief soared through him. “Where is she?”

“In the ladies room with Emily.” Her voice modulated back to a normal level.

“I’ll talk to her about it,” he promised.

“Have you heard from Kelly?”

“I’m sure she will. It’s just the press will be there, and all of your father’s old rivals.”

He needed to apply some of his CEO handbook rules in dealing with his mother. For example, rule number two: maintaining control at all times. Though the best one would be rule number eleven on using his sense of humor. It seemed to have deserted him for the moment.

“I’m working. What time are you bringing Taylor home?”

“In that case, bring her by my office, but have her dressed. We’re meeting friends for dinner tonight.”

Alex shook his head and hung up.