Leap into the Knight ~ M.J. Schiller 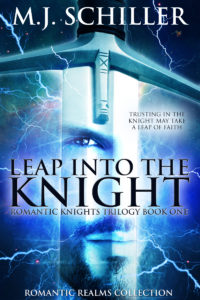 Sir Darius Lee is a Knight of the High Order.

But when Darius discovers a stranger in his room in the middle of the night, and the intruder turns out to be a beautiful woman, he begins to question how he is meant to live his life.

Princess Megan of Bethyea is being held captive.

But when two knights help her to escape and bring her back to her home planet, she finds the home she knew no longer exists.

When The Council of Twelve questions Darius about his relationship with Maggie, she tries to flee from The Academy of the High Order to prevent him from losing his knighthood.

Will Darius and Orion find Maggie before she leaves Albion? And if they do, how can they face the decision of The Council? And what about the feelings Orion has developed for the princess?

Maggie said a silent prayer of thanks as she shot down the chute in the darkness, her head bumping repeatedly on the slick but uneven surface. Luckily, the opening was reinforced to hold the large quantity of laundry that passed through here from one of the main living quarters in the barracks upstairs. She wondered what awaited her at the end of this ride, but was spared much thought as she shortly landed with a soft WHUMP in a large canvas bag full of towels. She listened for service droids, but heard only the steady humming of the large machinery that ran night and day in the basement. Slowly she lifted herself out of her landing spot and glanced around.

She was in a large area that seemed small because it was crammed full of washers and dryers. Pipes and large vents snaked their way across the ceiling and a hissing of steam and a mechanical banging sounded somewhere behind her. Every twenty feet or so, a canvas bag on wheels, like the one she was dumped into, sat under an opening in the ceiling, gathering dirty uniforms and linens from upstairs. The thought of all those uniforms belonging to guards who slept only a few floors above started to overwhelm her, but she knew she couldn’t turn back now. Directly across from her and behind a row of dryers she could see a set of chrome shelves containing soap and laundry supplies. It reached almost to the ceiling. Above the top shelf she spied a series of small windows that hardly seemed big enough to let in any light, but perhaps helped to relieve some of the heat of the laundering on a hot summer’s day. She grasped a vertical bar connecting the shelves and found it to be solidly attached to the wall. Hearing voices behind her, she shimmied up the shelves as stealthily as possible.

Leap into the Knight 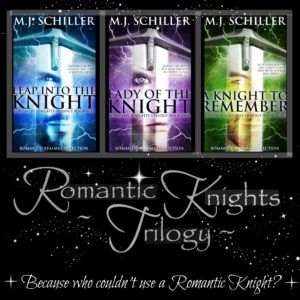 If you enjoyed LEAP INTO THE KNIGHT, you may want to follow the further adventures of Orion, Darius, and Princess Megan in Book Two-LADY OF THE KNIGHT, and Book Three-A KNIGHT TO REMEMBER! 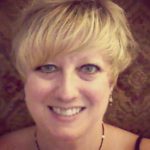 M.J. Schiller is a lunch lady/romance-romantic suspense writer. She enjoys writing novels whose characters include rock stars, desert princes, teachers, futuristic Knights, construction workers, cops, and a wide variety of others. In her mind everybody has a romance. She is the mother of a twenty-year-old and three eighteen-year-olds. That’s right, triplets! So having recently taught four  children to drive, she likes to escape from life on occasion by pretending to be a rock star at karaoke. However…you won’t be seeing her name on any record labels soon.