Captivated By His Countess 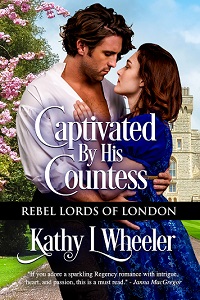 The Countess of Huntley, Gabriella, aspires to help less fortunate women gain independence from unfortunate circumstances. But her impulsive nature triggers one scandal after another.

The Earl of Huntley’s new wife is as unpredictable as she is lovely. And when a woman of questionable character disappears, and a man of the peerage ends up on the wrong end of a blade, the trail leads directly to his wife.

Huntley will do all in his power to protect Gabriella from the blackguard who is not thrilled with her good works. Difficult, when she doesn’t show the slightest care for her own ruin or… safety.

Read the series:
Enchanting the Earl – A how they met prequel
The Earl’s Error – Lorelei and Thorne
The Marquis’s Misstep – Ginny and Brock
The 7th Son – Peyton and Alistar
The Viscount’s Vendetta – Maeve and Brandon
The Duke’s Detour – Rebecca and Sebastian
Captivated by His Countess – Gabriella and James