Now that my bookendbabes.com days are gone, I thought I would start doing reviews of books that I found enjoyable. I will never trash a book, so basically, if your book does show up here, that’s great, but if it doesn’t that doesn’t mean I disliked it either. Writing fun little things on books I really like does take a little time, and sometimes, I just don’t have the little time. 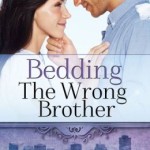 Today, however, I’ve decided to start with Virna DePaul’s Bedding the Wrong Brother. I suppose I chose this one because I read several reviews after I finished the book on how smutty it was. So I felt inclined to refute that claim. Specifically, because there is one scene the made the book and the hero the perfect story.

Yes, the book is sexy. Helloooooo, it’s a romance. It’s not erotica. It was definitely and primarily a love story.

I shall start with the fact of the identical twins. The fact that the heroine can see right through the both of them was ideal. She’d practically grown up with them, which not only made it plausible that she could tell them apart, but probable.

Plus, she was very good friends with both of them despite being in love with Rhys. Ms. DePaul did an excellent job of keeping the personalities between the twins unique. Another plus! I also loved that they were magicians. I’ve really never seen that before and it worked within their act, the way they used their physical similarities. I thought Max (though he wasn’t the hero of this story) was a hero in the story.

Now, the part that sold me? Rhys and Melina have had an over the top lovemaking session that plain wore her out. And just as she fell into a needed slumber, she says “Rhys” name. That’s good.

Then….the next morning she calls him “Max”. Okay, that just pisses off Rhys, and with good reason. But—- what made Rhys an excellent hero, was how he laid back on the bed and took a moment to think things through.  And the fact that Melina referred to him by “Rhys” the night before told him (geez, I love a guy with common sense) she felt things for him. Not Max.

That was it! The guy, though angry and upset, realized something was missing from the picture and he was determined to find out what. Imagine a hero who picks up on something really important. If the character had over reacted with fury and disgust for a ballooned conflict, I would not be writing this quick review. (I recently started a regency that had promise, a great cover. But the hero went off on the deep end, didn’t listen to a word anyone said, spoiled his one child to the point, that were it this day and age, would be a drug addict galore. I deleted the book when he was still lying to her and took her to bed. All the author would have needed to do was have the heroine initiate and the hero putting up some kind of fight, then have him lose it over a kiss. But nooooooo—yeah, I deleted it. The good news, is that I will not be slamming the book. I just won’t be telling anyone it’s any good either.)

So, Virna DePaul, thank you for a really cute read. So cute, I’ve since purchased (last night) Bedding the Bad Boy. 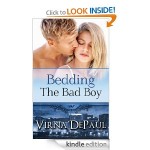