Another year, another Nationals.

You aren’t certain what I’m mean by “Nationals”? Why the Romance Writers of America conference. Annually held each summer in major cities across the US.

Seven and half years ago I learned about RWA while digging around my favorite authors websites. In particular, it was through Susan Elizabeth Phillips page for writer’s where I learned there was even a national organization for romance authors. Of course, at the time I did not consider myself an author, just a dabbler with one “story”, and not a very long one at that. Only 13k words.

I also learned their annual conference the next summer would be in held in Dallas. That is not so very far from Oklahoma City. Sign me up!

The icing on the cake was finding one of the best chapters was located right in my front yard, the Oklahoma Outlaws, officially known as the OKRWA. This chapter was home to such notables as Merline Lovelace, Sharon Sala, Amanda McCabe, Gena Showalter, PC Cast, Jill Monroe, Jordan Dane, Brooke Taylor, Georgina Gentry, Margaret Daley, Laura Marie Altom, Maggie Price, Malena Lott, Silver James, etc, etc… many others that escape my tired brain.

Over the course of my seven year stretch of writing, I now have completed over 10 manuscripts, and of course, have about 10 others screaming to be finished. I’ve had several critique partners over the years. Many of whom are moving into the big leagues, that include: Mary Jo Springer and Alicia Dean (watch for these two–they’ll be big someday!) I should probably note a few others from the chapter who are one their way too: Callie Hutton, Liz Tyner, Maxine Douglas, Tamrie Foxtail, Anna Kittrell, Jessica Ferguson, Heidi Van Landingham, Krysta Scott.

The sweet part of my story begins like this:

I was a computer programmer for over fifteen years with the Hertz Corporation. I’d survived at least 4 major layoffs. Well, in January of 2014, my luck had run out. Not to worry, I picked up a contract position quickly enough, but…well, now that I was in a new job that paid much less, going to Nationals did not seem quite so feasible.

I was standing in the kitchen one late afternoon, just talking (as I so often do) to my husband (who sometimes totally tunes me out) and said, “Wow. This is will be the first Nationals I’ve missed in seven years.”

“What!” My husband was most indignant. “Why aren’t you going? Is it money?” 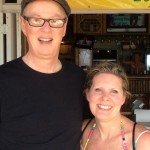 “Well, yes. Remember? I got laid off.” Frankly, I  thought he was paying attention to the news. And I was just saying, after all.

“If it’s just money, I’ll pay your way. You need to go to that! You have to write. That is your calling.”

I just looked at him stunned, but only for a moment. “Okay.” Sounding meek is not my usual persona. I signed up the next day. A month later the conference sold out.

Thank you, my dear sweet husband. Now I’m off to hobnob, network, and see friends that I haven’t seen in a year.