Thank you so much for having me, Kathy!

I have a new book coming out later this year titled Shattered Promises, and until then I’d like to introduce you to the first story in the Rock Ledge Series, Tangled Promises. 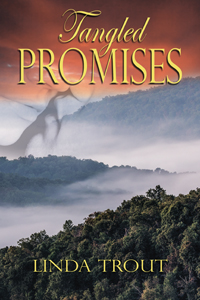 For a sleepy little town in the Ozark Mountains of Arkansas, a lot sure happens. A plane crash brings not only rescue personnel, but swarms of media, gawkers, and some rather unsavory characters. The town is plagued with vandalism (and worse) and in the mist of all that, Melody falls for the one person she least expects.

Blurb: Widow Melody Rose has already lost one man whose job involved guns and violence. She swore she’d never put herself through that again.

At first Sheriff Jake Bennett wants nothing to do with the taciturn café owner, but Melody intrigues him. When a stalker targets her, he’s determined to protect the woman he has fallen for. But can Melody overcome her greatest fear and save the man she never dreamed would claim her heart?

Excerpt: Jake stopped and wrapped his arms around her trembling body as she buried her face in his shirt. Her hands continued to flutter. A low keening sound from her broke his heart.

Her knees gave way completely and she sagged against him. Jake scooped her into his arms and carried her far enough that the fog enveloped them, distancing them from the sights and sounds of the crime scene. She leaned against him, her soft body reminding him she was all woman.

He stopped at a pickup and sat on its tailgate, holding Melody on his lap. He’d witnessed a lot of traumatized people over the years, but to see the pain of this always in control, tough, take no guff from anyone business woman put a little crack in his cop-armor.

Melody turned into his chest, her shoulders shaking, as she silently cried. He didn’t speak, just gently rocked her until her tears were spent.

“I’m not too fond of them myself.”

Bio: An Award-Winning and Amazon Kindle sales top 25 Bestselling author, Oklahoma native Linda Trout loves Happily-Ever-Afters. Getting lost in a good book is one of her favorite pastimes so it was natural that she turned to writing, wanting to create intriguing stories of her own. Between her numerous cats, who think they have to help her write, and traveling to various parts of the country, she’s working on her next novel. Find Linda at: