I asked Cynthia how she got Twitter followers. Let us know what you think!

KLW: Thanks for coming by, Cynthia.

CW: Thanks for having me today. I’ve been asked how I get followers. I have about 24,000 followers right now on Twitter. Now I doubt very seriously that all of them are readers of my books, though I would say that about 90 percent of them (my guess, no hard data) are readers of fiction. Why would I say that, well because of where they came from. Read on.

I’m going to use myself as the example in my instructions. This is how you build your Twitter followers. First you need to get rid of all those who you are following but they are not following you back. To do this you need to “flush” them away.

I use Tweepi to do this. You can find them at www.Tweepi.com  Make sure you are
signed into Twitter before you go to Tweepi. Then I sign in and do the “flush” option. Just before writing this post, I flushed 161 people who weren’t following me. It took me less than a minute. This leaves me more room to find those who will follow me back.

After you’ve gotten rid of your non followers you need to find followers. Go back to Twitter and go to my page www.twitter.com/CynthiaWoolf  If you are not following me, click on follow. Then click on Followers. This will bring up the list of my followers. Now go and click ‘follow’ on a hundred or two hundred people. If you don’t have the room to do that many because of the 2000 limit, click on the amount you can.

When you are doing this part, find an author that you like, perhaps one that you follow or who writes like you do and follow her/his followers. For this exercise we are using me and my followers.

of your followers. I used to do this process every 4 days or so, flushing and then following new people. It took me about a year to build to the number I have today.

It’s not an overnight process. There are companies out there who tell you they’ll get you ten thousand followers for so much money. They may or may not be legitimate. For me, it doesn’t matter one way or the other. I’m not going to pay for something so easy to do myself.

The other thing I do is try to follow back. I don’t follow companies or businesses or corporations. I don’t follow radio or TV stations. Pay attention to who you’re following and make each one count.

Cynthia Woolf was born in Denver, Colorado and raised in the mountains west of Golden. She spent her early years running wild around the mountain side with her friends. 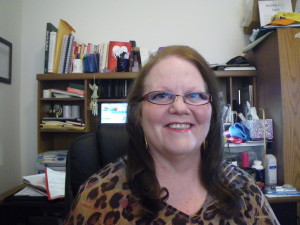 Their closest neighbor was one quarter of a mile away, so her little brother was her playmate and her best friend. That fierce friendship lasted until his death in 2006.
Cynthia was and is an avid reader. Her mother was a librarian and brought new books home each week. This is where young Cynthia first got the storytelling bug. She wrote her first story at the age of ten. A romance about a little boy she liked at the time.
She worked her way through college and went to work full time straight after graduation and there was little time to write. Then in 1990 she and two friends started a round robin writing a story about pirates. She found that she missed the writing and kept on with other stories. In 1992 she joined Colorado Romance Writers and Romance Writers of America. Unfortunately, the loss of her job demanded she not renew her memberships and her writing stagnated for many years.
In 2001, she saw an ad in the paper for a writers conference being put on by CRW and decided she’d attend. One of her favorite authors, Catherine Coulter, was the keynote speaker. Cynthia was lucky enough to have a seat at Ms. Coulter’s table at the luncheon and after talking with her, decided she needed to get back to her writing. She rejoined both CRW and RWA that day and hasn’t looked back.
Cynthia credits her wonderfully supportive husband Jim and the great friends she’s made at CRW for saving her sanity and allowing her to explore her creativity.

Cynthia also writes scifi romance as CA Woolf. The titles of her books under that pseudonym are:

THE SWORDS OF GREGARA – RIZA

THE SWORDS OF GREGARA – HONORA 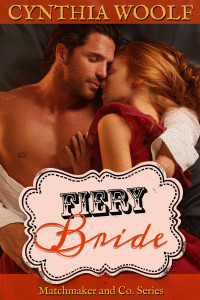 Cynthia’s latest book is Fiery Bride. Book 3 in the Matchmaker & Co series. Here is the blurb and a short excerpt from that book.

After a disastrous marriage, Matchmaker Maggie vowed never to marry again.  She will never give another man the power of life and death over her body and soul. Unfortunately, that doesn’t keep her lonely heart from fantasizing about her newest client, Caleb Black. She made the mistake of starting a flirtatious correspondence with the clever devil, believing they would never meet. But when his new bride abandons her mid-way to Colorado to elope with another man, Maggie is forced to face the devastatingly handsome Caleb and explain.  Now she’ll have to stay long enough to make things right and find him a new wife.  But Maggie better hang on to her vow with both hands, because Caleb has other plans for the fiery matchmaker…and a very seductive kiss.

“What do you mean, you quit?  Mr. Sinclair, you just can’t quit.”  Margaret “Maggie” Selby put her pen down on the desk.  She would not raise her voice.  She would not lose control.

“I’m sorry, Mrs. Selby, but I got no choice.  There’s an opening at the sanitarium in Albany and my Mary, she needs to go right now.  The doctors there might be able to help her.  We leave on the morning train.”

Maggie took a deep breath and nodded.  She understood.  She really did, but it didn’t change the fact that she was now in a difficult situation.  “Of course, you must go.  I know how poor Mary’s health is and any help that can be obtained for her, must be.”

“I wish I could give you some notice, but we just received the letter in yesterday’s post.”

He handed her an envelope.  “Here are the train tickets.”

“Yes, well, I’ve wanted to see the frontier I’ve been sending my these girls to.  I’m simply going to see it sooner than I anticipated.”

Maggie got up, came around the desk and held her hand out to him.  “You just take care of Mary.  That’s your job now.”

He shook her hand, nodded.  Mr. Sinclair put on his hat and wiped his brow with his kerchief before venturing back out into the already hot and sunny morning.

She went to her desk, grabbed Caleb Black’s file, put the closed sign on the door and then went upstairs to her apartment to pack.  Her bride, Jenny Talbot would be by in an hour or so to pick up her tickets.  Maggie would tell her then that she’d be accompanying her, not Mr. Sinclair.  It was just as well.  Jenny was nervous as a kitten and Maggie worried about the union, but both Mr. Black and Jenny had been adamant that it take place.  If truth be told, Maggie herself was a better match for Mr. Black than Jenny.  But she was here to find matches for others, not for herself.

Jenny’s reasoning she understood.  Jenny was the oldest of the seven Talbot children.  At twenty-two years old, felt she was a burden on her parents even though she worked and helped out with the bills.  She hated her job and wanted to get married.  Her chances were growing slim.  Most men of marriageable age were either already married, old or widowers with hellions for children.

Jenny was a tall, slim girl with pale blue eyes and dark blond hair.  Her lips were full, her nose long and straight.  Just a plain young woman from a struggling family who wanted a better life.  One that the wild frontier might be able to offer.

Mr. Black’s reasoning was less clear.  He was successful and wanted children.  Maggie had presented him with several other possible candidates, some more attractive, some younger, some older, all of whom he’d rejected.  The reasons he gave were weak.  Brown hair.  Too short.  Too fat.  Too thin.  Too young.  Too old.  There seemed to be a reason for rejecting every one she sent him.

Finally, he’d settled on Jenny with the proviso that Maggie herself accompanied the girl.  She’d agreed, but stated only that Jenny would be accompanied.  With her full intention having been to send Mr. Sinclair in her place.  Maggie’s time was much more well spent here in New York.  Finding clients, assigning candidates that is where her mind, body and commitment lay.  Yes, running her business is where she belonged more than on a trip to the wild West.  She didn’t feel bad about her decision.  Really she didn’t, she told herself over and over.  But she was lying.  If she were honest, deep down she was afraid to meet Mr. Black.  Afraid her image of him would be wrong, but even more afraid it would be right and he really was the man he depicted in his letters.

She shouldn’t have allowed it, the private correspondence, but it had been innocent enough.  In the beginning.  A simple flirtation with someone she’d never meet.  But now, the thought of actually meeting him terrified and thrilled her at the same time. Now she had to go.  Maggie released a rather breathless sigh.  She blinked repeatedly against the harsh sunlight.  So Mr. Black was getting what he’d asked for after all.  Much to her dismay.