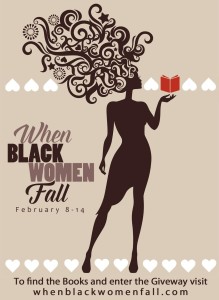 The When Black Women Fall promo features romances in the contemporary, historical, paranormal, science fiction and fantasy, and erotica genres. The two requirements for inclusion are that the heroine must be of African/African-American descent, and she must fall in love: same race, interracial, LGBT, aliens, cyborg—doesn’t matter to us, as long as it’s a black woman falling in love!

For the week leading up to Valentine’s Day during Black History month, Heartspell Media is spreading the word about “When Black Women Fall” — a week-long promo featuring romances with African-American heroines.

February 8-14, 2016. The week leading up to Valentine’s Day during Black History month.

The Education of a Black Heroine by Piper Huguley

When The Preacher’s Promise was first put forward to the public in the quarterfinal phase of the final Amazon Breakthrough Contest, some people began to question the history of my story in their reviews. They had never known of the possibility of an educated Black woman who traveled on her own to the southern states to teach. But I knew that this ignorance developed out of the lies that history tells us. We hear a lot about the brave white Christians who went to the southern states right after the Civil War, but we hear nothing of the Black people who went to help. This is one of the reasons why I wrote The Preacher’s Promise, so that the historical lie of omission could be exposed.  My heroine, Amanda Stewart, was based on the real-life exploits of two Black women, Mary Patterson and Mary Peake.

Mary Jane Patterson is the first black woman who is credited with having earned a B.A. degree from Oberlin College, one of a handful of schools before the Civil War who were willing to give Black people a chance at higher education. She graduated from Oberlin in 1862. A historian of Oberlin College, Robert Fletcher, says that she taught school in Philadelphia, and later became a principal of a preparatory high school for Black students in Washington.

My heroine, Amanda, arrives in Milford, Georgia after the Civil War, just after her graduation in 1866 from Oberlin.  Some real-life African American teachers were willing to take their lives and liberty into their own hands to teach the still enslaved populations how to read and write before the war ended. One of these brave people was Mary Peake.

Born of a free mother and an Englishman, Peake started a school in her own home state of Virginia on the grounds of what is now Hampton University.  She started the school in 1861 after her own home had been burned by Confederate forces.  Finding herself displaced, she taught the enslaved people who had gathered at Fort Monroe.  She had taught out of her home for years and now brought those skills to this new endeavor with purpose. The population of the school went from six to fifty within a matter of days.  Remarkably, Peake was also working as a married woman, having married Thomas Peake, one of the formerly enslaved.

Unfortunately, the next year, Peake caught tuberculosis and died.  Her endeavor may not have lasted long, but Peake’s school planted the seed of an idea that spread and motivated many others to leave the comfort of their lives and homes to help the enslaved.  So the provenance for an Amanda Stewart is certainly there. And the American Missionary Society, who built up several schools for the enslaved in the South, documented many more men and women of color who came south to each the recently enslaved. Novels are written about the uncommon and the exceptional. We may not know these Marys by name, but they were certainly exceptional. Their accomplishments should be remembered, and my Amanda Stewart is my way of commemorating these women who paved the way for many.

To experience Amanda’s story yourself, pick your copy of “The Preacher’s Promise” today! You can find this and other romance novels featuring black heroines on the When Black Women Fall promo tour at http://whenblackwomenfall.com.